Wars impacted heavily on Wadsworth. Although Wadsworth was founded after the War of 1812 began and nearly forty years after the Revolutionary War, people who came to Wadsworth brought their war stories with them and then carried them to their graves. Wadsworth Union Cemetery, known popularly as Woodlawn Cemetery, entombs the remains of these precious few warriors with pious respect. They are remembered each Memorial Day with dignity and honor.

Filling the graves in overwhelming numbers, however, are veterans from World War I and World War II. Wadsworth sent over 1100 soldiers to the battlefields between 1941 and 1945 -- particularly significant since there were only slightly more than 5000 residents in the City at that time. All but 27 returned.

The names of the 27 victims whose lives were prematurely stilled by the ravages of war are inscribed on a plaque in Wadsworth City Hall for all to remember long after those with first-hand memories will no longer be here to remember them. Korea, Vietnam, Desert Storm, Afghanistan, War on Terrorism, Iraqi Freedom; all names which were foreign to those who lived the simple life in Wadsworth, became all too real; so real, in fact, they will never be forgotten. 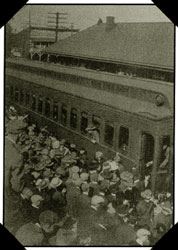 Wadsworth became a city on January 1, 1931, with 4,997 inhabitants as reflected in the 1930 census. It adopted the Statutory Form of government, if not by choice then by default. The Ohio Revised Code is explicit in what form a government will be adopted: If the municipality opts for a Statutory Form of Government, it will govern itself thus. If it opts for a Charter Form of Government, it will need to develop a charter and place it before the voters.