With the population now "booming", government began to become more formalized. On April 6, 1818, Wadsworth Township held its first election and officially named the community Wadsworth. Mail delivery began [although irregular and meager] in 1821, after which the first Wadsworth post office was built on Diagonal Road [now Wadsworth Road] and later moved to the center of the town.

Progress was at a standstill until about 1827, the year the Erie Canal was opened through Akron. What had been a stagnant economy for the early settlers was now becoming a promising ray of hope to compensate the settlers for all their hard work in clearing the fields to eke out a survival existence. With the new mode of transportation, some of their produce could be sold to outsiders since it could be transported via the canal. In 1827, the price of a bushel of wheat went from five cents to a dollar almost overnight. Poverty had turned into prosperity in the minds of the pioneers who compared it with their previous "spoils."

The grist mills were the first "industry" to greet the new age. Farmers could take their grain to be ground for feed and flour locally rather than having to cart it into Middlebury [East Akron] as before. This industry encouraged other industries which were required to support the milling industry, e.g., blacksmiths, wheelwrights, coopers, cobblers, wagon makers, etc. Soon, the ring of hammers on steel overpowered the dull sound of one furrow of soil falling upon another, the only sound the farmers heard for years before the Canal was opened.

Henry Morgan opened a general store in Western Star in 1825, but the venture was short lived. In 1826 Allen and John Pardee opened a store at the corner of what is now Broad and Fairlawn. They later moved it to the southwest corner of Main and College Streets, behind what is now the First Merit Bank building. Built of stone, it was call the Old Stone Store.

Allen Pardee then built the National Hotel on the other side of Main Street but it burned down in 1875. Harvey Buell Spelman, was a competitor of the Pardees. This fact is not of particular significance; however, what is significant is the fact that he was the father of Laura Spelman, who became the wife of John D. Rockefeller. She lived on the corner of School Drive and Main Street [the entrance to Central Intermediate School] in a house which stood until a few years ago. 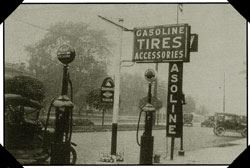 When Wadsworth celebrated its 175th Anniversary in 1989, a descendant of the Rockefeller family wanted to see where his grandmother lived but the house had been razed by that time. The Pardee family was prominent in Wadsworth. Aaron was an attorney and the first mayor; Eugene was an attorney; Allen and John were merchants; George was a physician.

They were a family of wealth and had material goods to characterize their wealth. They owned a magnificent house which was moved to the south side of College street after it had been built on Akron Road. The house still stands on Watrusa Avenue; however, it was divided into three smaller houses early on. Caroline Pardee, great granddaughter of Aaron Pardee, died in Akron at 93 years of age.